April 7, 2017 by Jane Hanna in Events and Programs 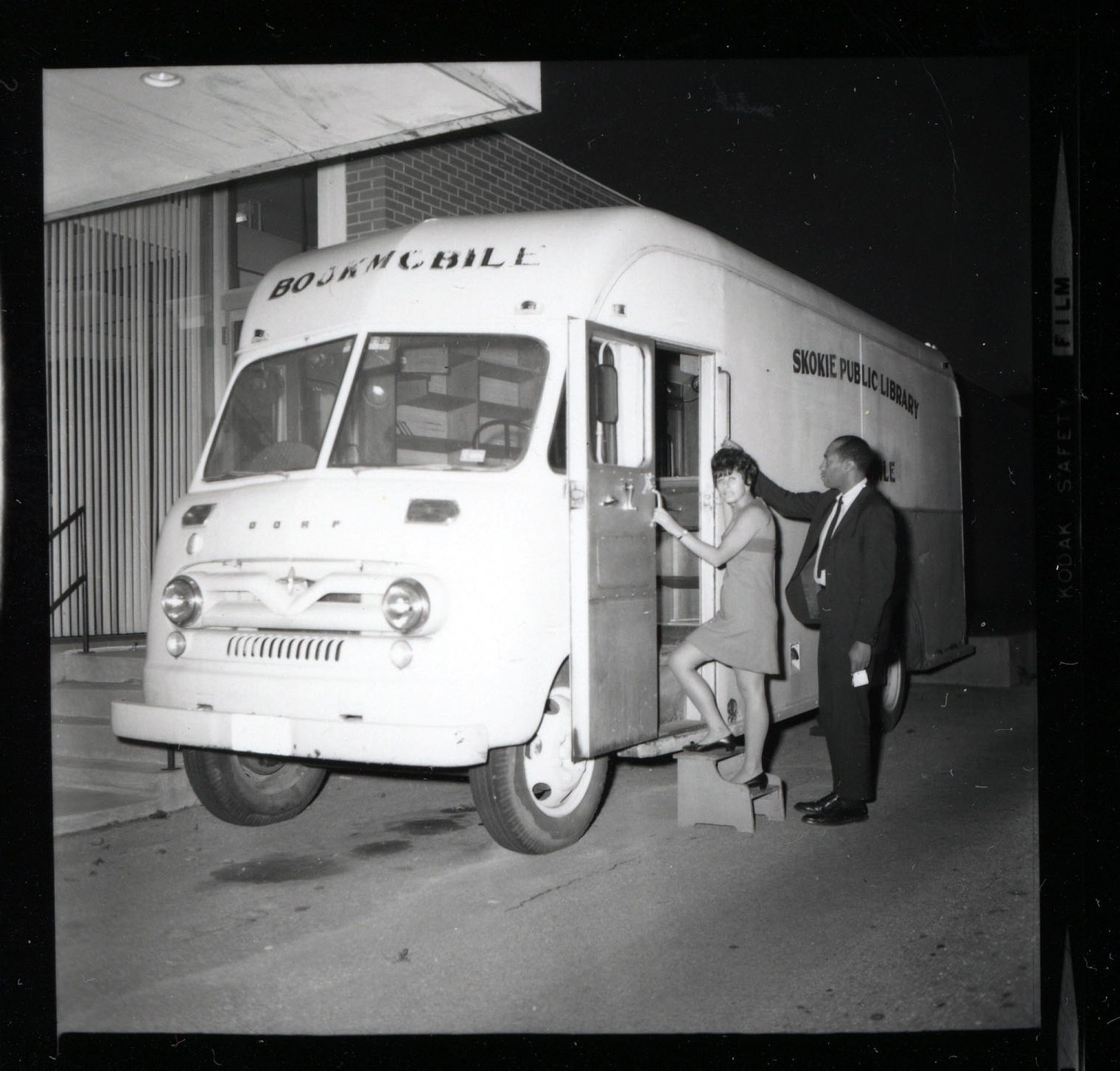 Sixty years ago, on Tuesday, November 11, 1957 at 10 am, the Skokie Public Library bookmobile made its first scheduled stop at Estes and Leclaire Avenues with a load of roughly 2,500 “adult and juvenile titles.” Many of these materials were on loan from the Illinois State Library when they were loaded into the 26-foot long, aqua green and yellow vehicle. Among the titles included on early runs were the self-help book The Power of Positive Thinking by Norman Vincent Peale and Nevil Shute’s post-apocalyptic novel On the Beach. Also on board was a stamping machine and a chart for determining late fees. Human occupants included librarian Charles Presar and 18-year-old library page, Doug Grist.

Susan Dickens is administrative assistant to the director here at Skokie Public Library. She also serves as the unofficial library historian. According to Susan, the bookmobile story really begins a year earlier in 1956. That's when Mary Radmacher became chief librarian. Radmacher saw a bookmobile as an effective way to provide library service to north, east, and northwest areas of the village. Susan explains, “In October 1956, Radmacher contacted Paul Wyer of the Gerstenslager Bookmobile Company regarding the purchase of a ‘good used or second hand bookmobile.’ In the paid bills from April 1957, a check is listed to Gerstenslager for $10,422." The first bookmobile, with the help of a dedicated staff, served Skokie from 1957 to 1968.

After retiring from the library, the first bookmobile began a new life as a mobile film-editing studio and the Library Board approved an $11,000 down payment on a replacement—a converted Dodge mobile home. On March 6, 1968, Radmacher reported to the Board that the new bookmobile had arrived.

The beginning of the 1970s proved to be a rough road for the bookmobile service, which was at one point discontinued for six months due to a lack of funding. The vehicle also required many repairs to keep it operational. According to Susan, "By 1979 this bookmobile was beyond repair and for a short time service was suspended. It was sold to the Niles Public Library in 1981." 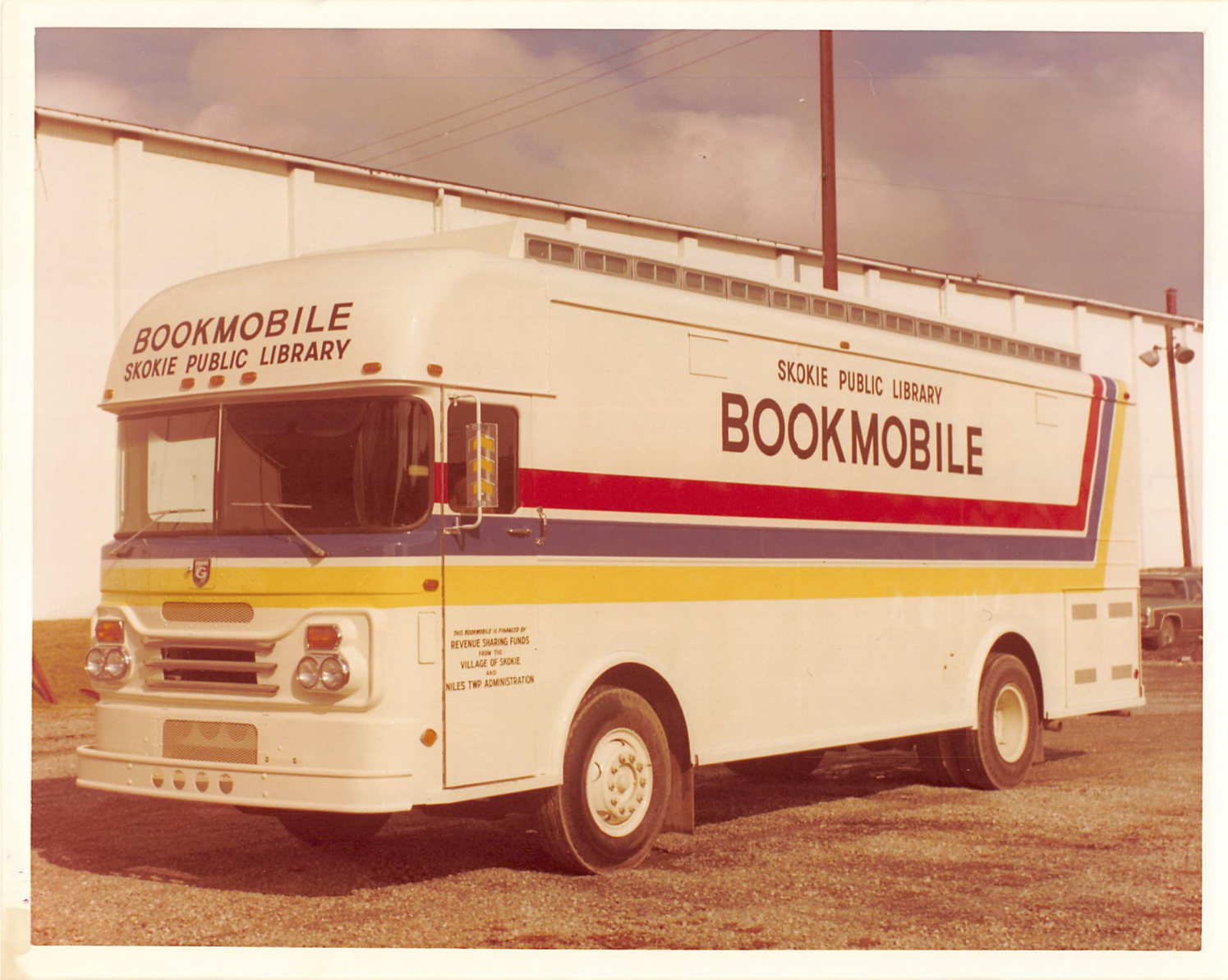 Discussions about the need for a new bookmobile continued as the new decade began, and in 1981 the third vehicle was purchased. After closely inspecting its warranty, Radmacher noticed the chassis and engine were already four years old. She refused delivery. After deliberation by the Board, it was agreed that the vehicle would be accepted with an amended warranty. With an additional 12 months added to the manufacturer's warranty, the 32 foot, 9 inch long by 13 foot, 4 inch high Gerstenslager bookmobile was in service.

In 1994, this vehicle was also in need of repairs. "After 13 years of use, and the development of several chronic problems, the original International Harvester engine was replaced with a comparable rebuilt Navistar," says Susan. "At the time of its manufacture, this was the largest gas engine in regular production in the United States." After serving for four more years with the new engine, the third bookmobile was sold to the Palatine Public Library. 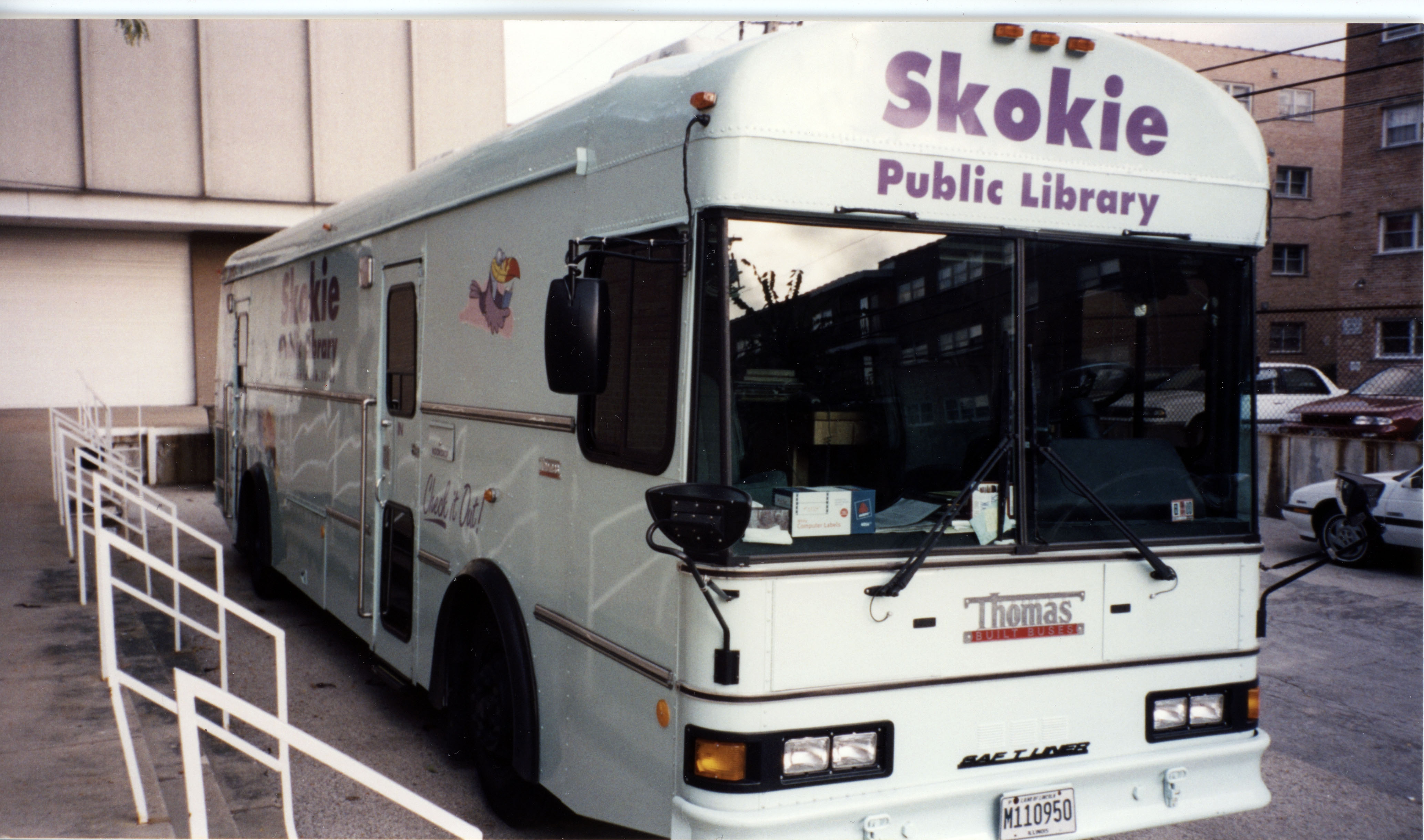 In 1997 the Board agreed to the acquisition of its fourth bookmobile. It would go into service the following year. “The fourth bookmobile was 37 feet long, 8 feet wide, and was wrapped with whimsical animals designed by artist Norris Hall of Murfreesboro, TN," reports Susan. "In 2006, due to wear, it was re-wrapped, which involved scraping off the old wrap, applying new paint, and updating the wrap with the library’s new Web address." You can still see Norris Hall’s Jungle Library painting on display in the library’s Youth Services department. This fourth vehicle in the bookmobile line was sold at the Northwest Municipal Conference Auction in 2016. 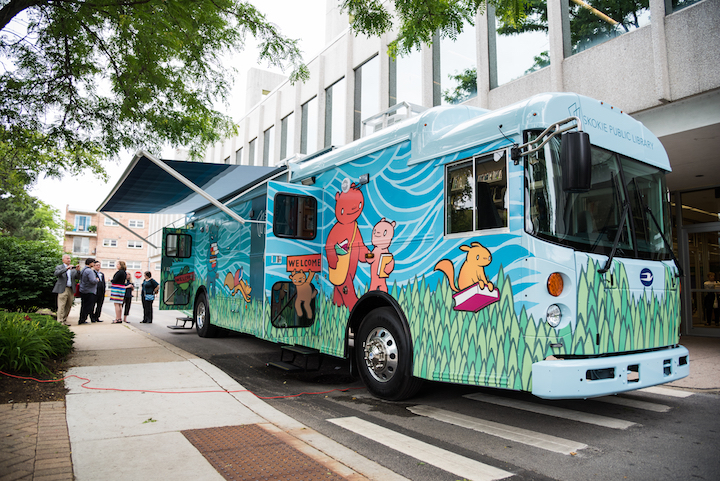 Many village residents have no doubt seen the current bookmobile model cruising the streets of Skokie looking fabulous wrapped in local artist Jay Ryan's artwork. Much like the ice cream truck, children and adults alike anticipate the bus's arrival and can be seen lining up ready to board before it even rounds the corner. The current vehicle is a 40 foot long Blue Bird model, and features a hybrid power system with solar-powered battery packs providing most of the power. It also has WiFi connectivity inside and out, a backup camera, proximity sensors, and skylights—amenities previous bookmobile librarians could only dream of.

We hope the bookmobile program keeps cruising for another 60 years to serve new generations of Skokie families.

Join us in the library parking lot on Wednesday, April 12 from 4 to 5:30 pm and help us celebrate the 60th anniversary of the bookmobile. There will be tours of the bus, cake will be served, and a children’s book character will make a special appearance.

Where to Find the Bookmobile

Visit the bookmobile in a neighborhood near you. You can check out books, DVDs, and more at locations throughout Skokie five days a week. Use your library card to check out and return items just as you would inside the library building. View the bookmobile schedule here.