The second floor is closed for renovation until summer.

Due to electrical issues, the bookmobile is out of service and off the road.

July 5, 2018 by Mike Buhmann in From the Information Desk

At the Information Desk, we get a lot of questions about the past. And that’s great, because reference librarians are part historian, part archivist, and all curious. We love the chance to dive into old newspaper articles, phone books, even microfilm from decades past. Sometimes, however, patrons want us to look back much further. Like the time a patron asked us for information on the history of the indigenous people of Skokie before colonization. We were happy to accept the challenge.

An obvious source, one might think, would be Skokie: A Centennial History.  This is certainly an important record of the history of our village. However, it was written in 1978, and from a very Eurocentric perspective. The history it provides begins in 1831 with a fur trader from England who built a log cabin in the area of today's Morton Grove. Obviously, the region was home to countless generations of people before this English immigrant’s arrival. A more recent book Images of America: Skokie, published in 2010, refined this view a bit. The first chapter is dedicated to the area’s indigenous past when the Potawatomi and Mascouten people lived here in the 16th through mid 19th centuries.

To provide a fuller picture of who lived in the area before European settlers, this map on the website of the Wilmette Public Library shows settlements from 1804, including Native American villages and trails. We also found a map (see below) on the Indigenous History of North America website that provides an overview of tribal locations in the mid 18th century. From it, we can see that the Potawatomi lived throughout what we now call the Great Lakes region, which includes northeast Illinois. 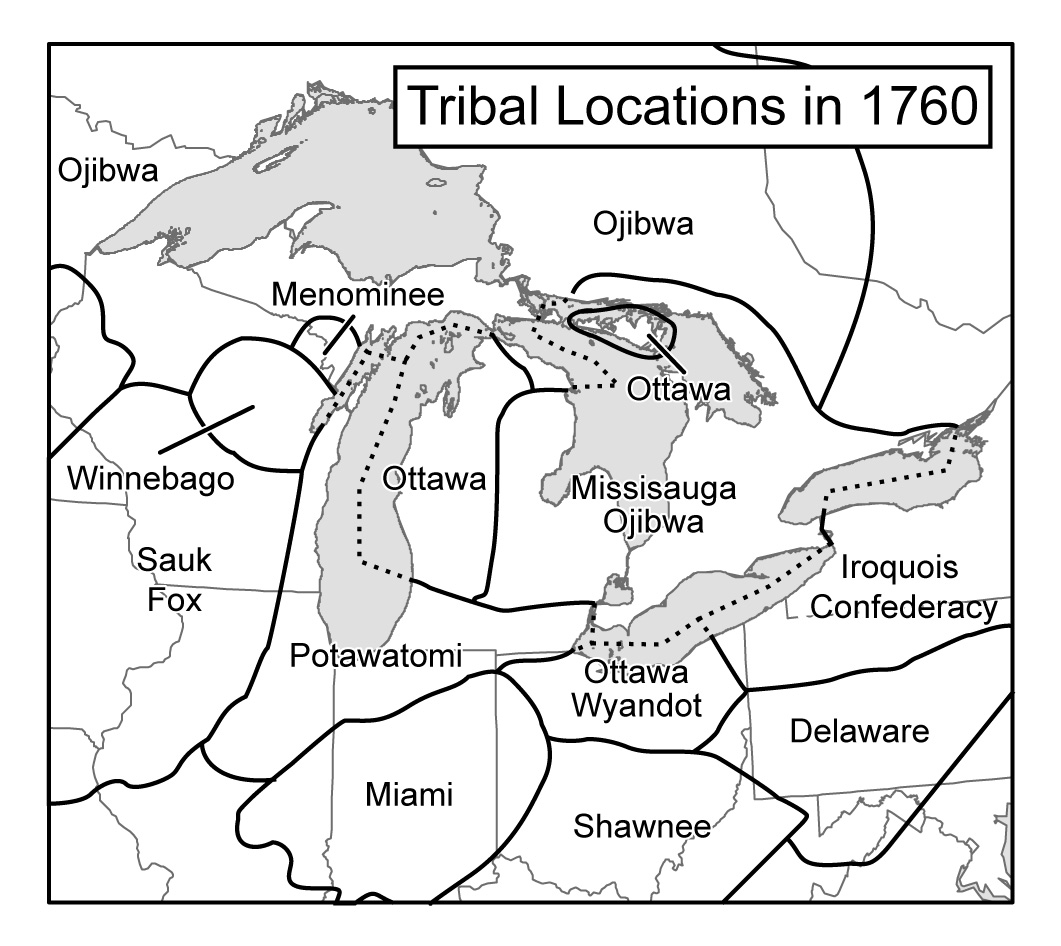 The Encyclopedia of Chicago includes information on the Potawatomi people and informs us that the first written record of the Potawatomi by European settlers was made by French fur traders in the late 17th century. By 1690, members of the tribe had started settlements in this area.

An article from the Encyclopedia of Native American Tribes has further information on the origins of the Potawatomi as well as their language, religious beliefs, and dealings with the U.S. government. A 1957 publication of the Illinois State Museum titled Indian Villages of the Illinois Country: Historic Tribes gives details of early settlements, too. Although there were no references to villages that could readily be identified as Skokie (or its previous name, Niles Center), some of the information on Chicago area settlements, and the removal of the tribes in the early 1830s, seems relevant.

While far from complete, given the resources available we felt we could provide a good overview of the indigenous history of Skokie. The patron was grateful for the information and we were happy we could provide it.

Have a question you just can't find an answer to? Ask us. Reference librarians are available in person on the second floor, by phone, or by chat (the "how can we help" box below).