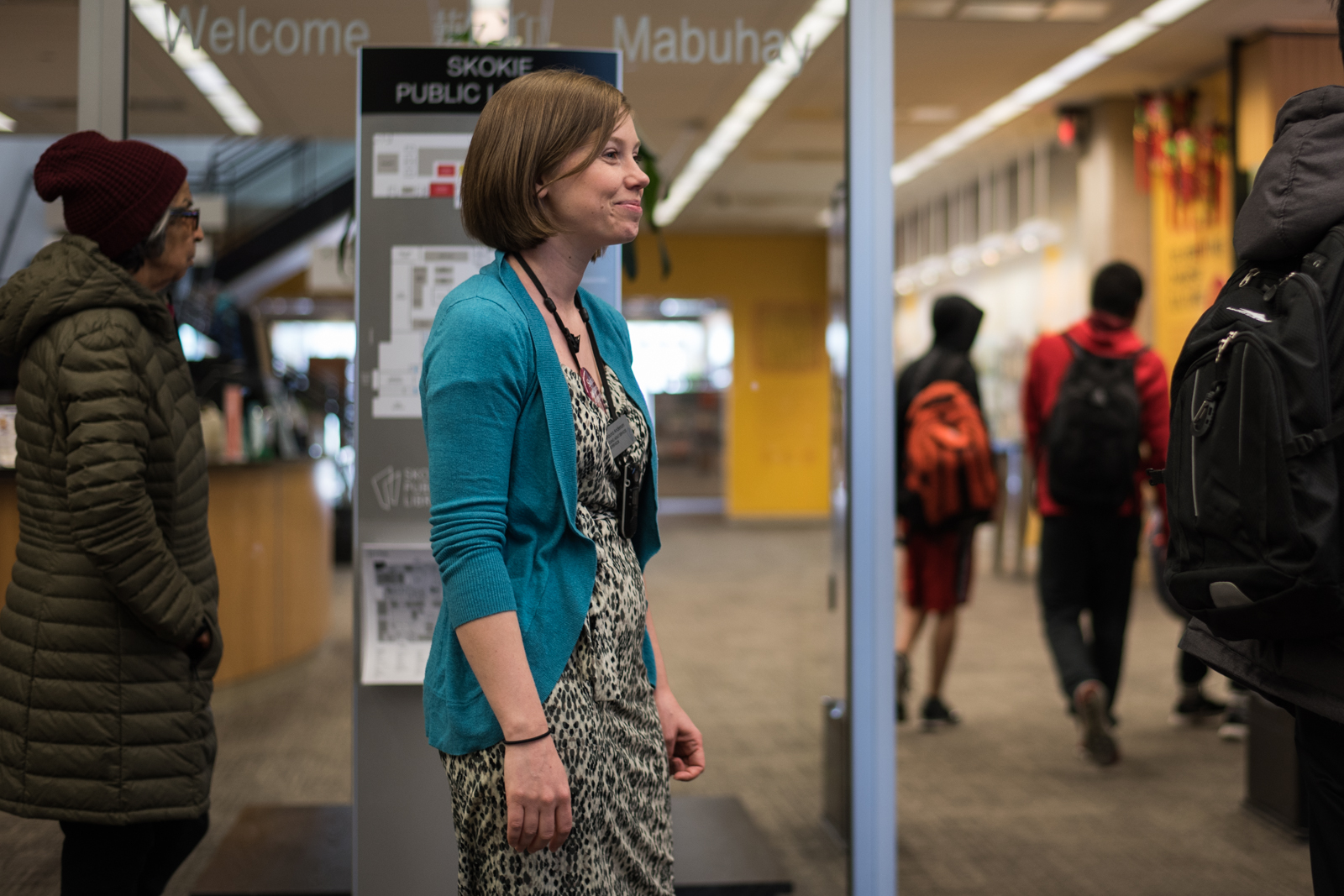 When Shauna, Young Adult Services Supervisor, first started working at Skokie Public Library four years ago, she says there weren’t many middle or high schoolers spending time in the library after school. But look at the Junior High Zone, or any space frequented by the young adult crowd these days, and you’ll often see a full house. Shauna sees teens as a highly influential piece of the community. With the help of a growing Young Adult Services team, she has created a welcome environment for Skokie teens to hang out and engage in activities in a safe space before heading home. We talked with Shauna about the YAS team’s work in recent years and where they want to go from here.

Can you talk about your presence—with Marni, Jarrett and Laurel—being there when the middle schoolers come in after school?

I think it does a couple of things. It lets us know who is in the building for the day so we get a sense of what kind of support, or even what kind of activities they might want to do, because we know a lot of their interests beforehand. We have prior relationships built. It also really sets the tone for how the rest of the day is going to be. So, we’re the first thing that they see and they’re being welcomed into the library by familiar faces—that brings a different kind of sentiment to what’s going to be expected of them. We can talk about or let them know what kind of activities there are going to be and ask them about their days. It’s a more personal touchstone that we have, whereas, when they’re spending time in our Junior High Zone space or in our Lab, they’re engaging in activities, they’re engaging with each other, but that welcome time is a time to check in personally.

Have they told you that they appreciate that?

Actually yeah. It’s usually whoever’s working in after school and if they’re available to come down, so sometimes we’ll have big groups down there, sometimes it will just be one person. Every once in awhile, when we’re really tied up and aren’t able to make it down, they will recognize it and say, "Where were you? (laughs) We were looking for you!"

Yeah, the high school crowd tends to use the other entrance and they trickle in a different way than the middle schoolers do. With the middle schoolers it’s like a big group of them that all walk over at once; the high schoolers, some stay after school a little longer, some have activities, so it’s a slower trickle into the High School Lounge and usually gets there about 3:30 pm and that’s usually before most of them come in so you can welcome them at the door of the High School Lounge in a different way.

Have [the middle school students] told you they don’t have any where else to go?

Oh yes. I know Lincoln Junior High does a great job of providing some activities—I know they have Y.O.U. as an after school program—but a lot of the kids that we see here don’t have as much parental supervision before their parents get home from work. They’re looking for a place that’s safe, where they can hang out with their friends, where they can work on their homework, or just engage in activities. So this becomes a really good middle spot between the school environment and when their parents pick them up or when they walk home at a certain time. Most of the kids that we know, their families use [the library] as a part of their after school plan. They spend an hour at the library and then they walk home.

Can you talk about the [Young Adult] team, how it was formed and the importance of it?

When I started here, we did not have kids coming in after school. The first time that I did a pop up activity in the Junior High Zone space, I had two participants. I had to get them to participate and it was those video game systems we had just purchased so I was bringing the controllers down for the kids to play. It’s a really different environment. We really did no marketing around it—it was entirely built off of word-of-mouth. Being present in the space actually was the biggest thing. A lot of people think that young people don’t want adults around, but at middle school especially, they absolutely do. They came here because I was going into the space everyday after school and building those relationships and acting as somebody they saw as a mentor.

When [my predecessor] Jessi left the team, we brought Laurel on and also our YA specialist and now we have two part-time people. That really expanded the pool of mentors. I didn’t want it to just be one high school person and one junior high person—young people need a range of mentors. There’s a lot of different skills that we bring to the table, everyone on the YA team. It was really important to me that everybody moved around and could be around high school students and junior high students because there are some kids that really have a connection to Jarrett or really have a connection to Laurel and they should have that sort of availability so they know they’re going to be around on a regular basis.

When you're hiring new people, what do you think you were looking for as far as a core work ethic where you knew they would work with this team?

I think that it takes a really strong understanding of youth development—positive youth development—and where young people are at this point in time. I think it also takes a really flexible attitude. You have to be really comfortable with improvisation, because you can come downstairs with an activity and nobody will want to participate but you still have 50 kids and they need something to do. You were down there the other day when I thought I was going to be doing "take apart electronics" and Marni and I rotated a lot and I was running around and she was in the space for awhile. So there’s a ton of flexibility. You never can plan out an activity from start to end and expect it to go the way that you want it to, so it takes a lot of improvisation. 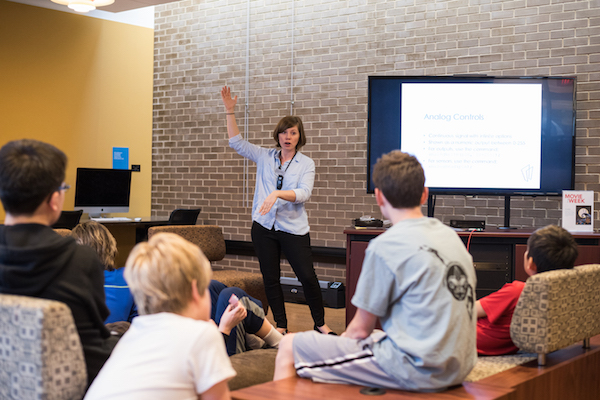 With the BOOMbox, can you talk about that relationship [with YA], did that change things at all for you, the way that you develop programming?

Yeah, I was on the ground floor when the BOOMbox got started and when we envisioned the space it was primarily targeted towards junior high students because we wanted to be able to offer more of those deep dive activities into more academically-oriented topics. Over time, the BOOMbox mission really expanded out towards the larger community, and that has been great, but being in close proximity to the Junior High Zone, it still lends this feeling of productivity after school. There’s no way that a kid should be bored in the library and the fact that we have very visible activates going on in a lot of different places means it is easy for our staff to point young people to places like the BOOMbox, The Lab, the chess sets, et cetera. When young people come in here, they have a lot of options, they’re not just looking for books or doing homework, and that’s something we want to encourage.

Going back a little bit, how did you first realize that you wanted to work with the young adult crowd?

I didn’t always think that teens were going to be where I ended up. I actually thought I was going to be a technology librarian or something because I do like working with technology, but I learned as a Peace Corp volunteer that teens are a really important access point for development in a community because what they learn they expand out in really interesting ways like spokes on a wheel. What they’re interested in, all of their younger siblings and their friends think is the coolest thing ever, so it sparks a lot of interest with young kids. Parents get really curious about what their teens are doing so they end up becoming more invested—they’re the ones teaching their grandparents how to use technology. Especially in this community, they’re also the ones who are translating for parents and being these cultural mediators, so they have this really important skill set already that they don’t realize they have. They don’t recognize what kind of leaders they are and often the community doesn’t recognize that either. I see that as a tremendous opportunity to continue to expand those skills to help them recognize what skills they have and what role they can play, and fostering that towards different opportunities that they’re going to be able to have down the line.

And speaking of that, I think that falls into the summer volunteering—trying to find a niche where they could focus on, like theater or podcasting.

Definitely. They can take these interests and see how it can have an effect in the community. One of the things that I like about the summer volunteer program that we’ve been able to build out is that they have a staff mentor as well. When young people don’t have an adult that’s helping them progress in areas of their interest, then they tend to hang back and rely on what’s comfortable, which is often peer culture, where they have their phone in front of their face all the time. But the phones in front of their faces are amazing tools, and when they have the right kind of encouragement and mentorship, and when they can see those tools for what they really are, then it becomes so much more powerful. That takes an older person showing them what those opportunities are in a lot of ways. Mentorship—that’s one of the biggest things that we really build out our programs on.

Is there any specific ways you want to build on that this summer or in general going forward?

I think the YA team is interested in expanding this idea of mentorship across the rest of the library because as I mentioned before, young people are better served when they have a wide range of mentors. It’s this idea of social capital—that young people don’t have access to a ton of social capital that’s going to be really meaningful. They have a lot of peers who they can rely on and find support from emotionally, but if kids are going through a tough time, or they want to get a job, or they want to move forward in their lives, their peers aren’t going to be the ones that do that, it’s going to be the adults in their lives that help them in that way. So here at the library, we have a really diverse staff and we have an engaged staff who’s really interested in being a part of the community and that goes across from part-time to full-time. Helping everybody in the organization see themselves as mentors and finding ways to carve out spaces for mentorship in their small interactions with young people is really something that I’m interested in going forward.