Since the 1920s, we have been a fixture in the community. Follow our story from then to now and learn about the permanent art on display in the building.

The Cosmos Club forms and decides to start a public library. The Niles Center Public Library opens on the second floor of the Blameuser Building at Lincoln and Oakton. The library contains 1,000 books and is open 10 hours a week.

A referendum to obtain tax support for a library fails by about 30 votes. The library moves into a room in the Municipal Building and the Village sets aside a small sum from the general fund to provide for a half-time librarian.

Skokie voters approve a tax-supported library, with a tax rate set at a maximum of $1.2 million.

The library leases half of a building at 4913 Oakton Street and the post office occupies the other half.

The post office moves, giving the library the entire building for its more than 18,000 books.

The library building is honored by the American Institute of Architects and the American Library Association.

Almost 67,000 square feet are added to the building, increasing its capacity to 350,000 books. The architect was James W. Hammond of Hammond & Roesch, later Hammond, Beeby and Associates.

The American Nazi party makes plans to march in Skokie. In preparation, law enforcement agents place gun mounts on the library’s roof. The march does not take place.

The library is depicted in a cachet by Skokie artist Doris Gold for the “Libraries of America” stamp issued by the United States Postal Service on July 13.

The library is awarded a State of Illinois grant to begin a pilot program offering services to the disabled.

The card catalog is replaced by GEAC, an online catalog. Compact discs are added to the collection.

Representatives of George Bush, Sr.’s presidential campaign request that he be allowed to make a speech in the library. The request is refused, and he speaks in front of the Holocaust Memorial on the Village Green. The library is closed to everyone except reporters, who fight over the library telephones.

The library wins the North Suburban Library System’s “Library of the Year” award.

Work begins on a major expansion and renovation of the building. Robert D. Hunter was the design architect, from O’Donnell Wicklund Pigozzi and Peterson.

Director Carolyn Anthony receives the Illinois Library Association’s “Librarian of the Year” award. The “grand reopening” of the building features the addition of a third floor and expansion of the first floor on the west side of the building, with a new entrance, among the extensive changes.

Skokie Public Library is the first public library in Illinois to be awarded the National Medal for Museum and Library Service. Three library representatives travel to the White House to receive the award.

Director Carolyn Anthony is elected a 2013-14 president of the Public Library Association. The second floor is remodeled to add a Business and Career Center, as well as six additional study rooms.

The library is awarded 5 stars (the top ranking) in Library Journal’s national ranking of public libraries.

Get an overview of how our 133,190 square foot building is laid out. 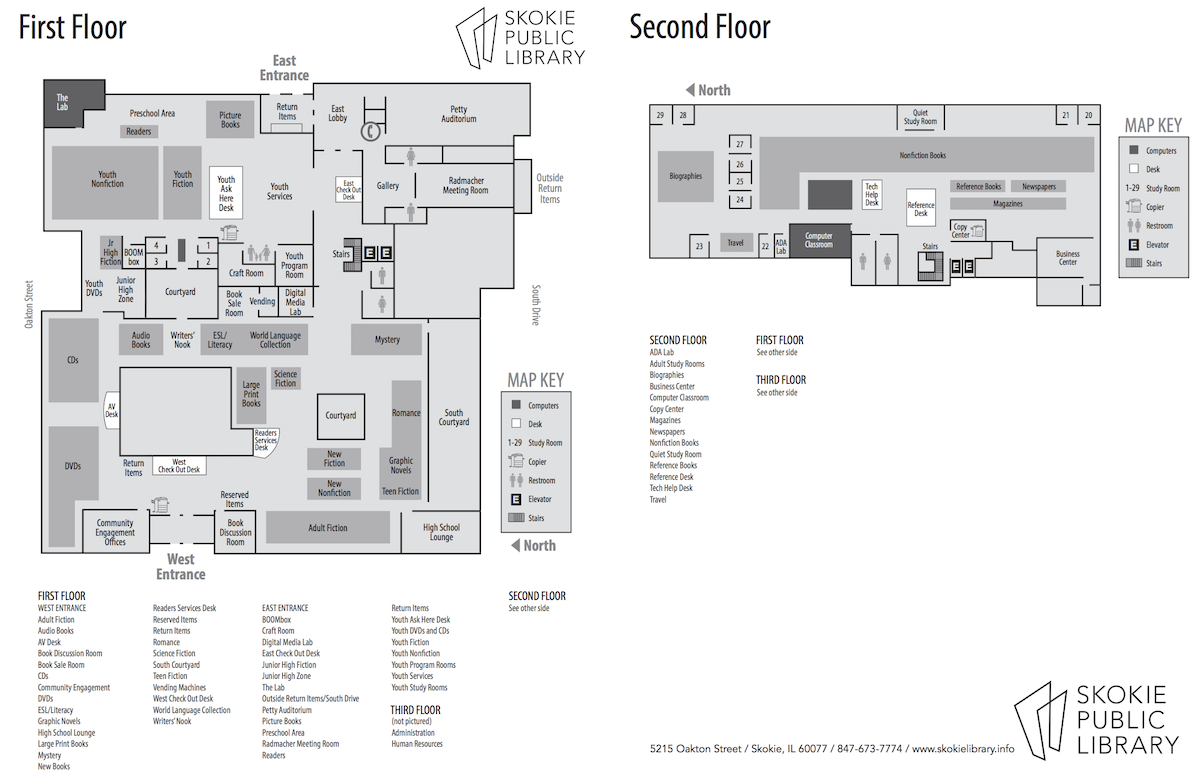 Paintings, sculptures, even a tapestry grace the library’s walls and grounds in our permanent art collection. Learn more

Three print sources related to the library’s history can be found in the catalog, or ask at the Information Desk.